A former Trump-era State Department aide has been arrested in connection to the Capitol Hill riot, the FBI confirmed to Fox News on Friday.

Federico Klein is facing charges of violent and disorderly conduct, assaulting an officer and obstructing Congress and law enforcement, the agency said.

Klein once worked as a "tech analyst" for Trump’s 2016 campaign before becoming a special assistant in the Bureau of Western Hemisphere Affairs, according to Politico.

On Jan. 6, the 42-year-old "physically and verbally engaged with the officers holding the line" at the U.S. Capitol Building, "thereby affecting their ability to disperse the crowd," an FBI special agent tasked with investigating Klein wrote in a criminal complaint. 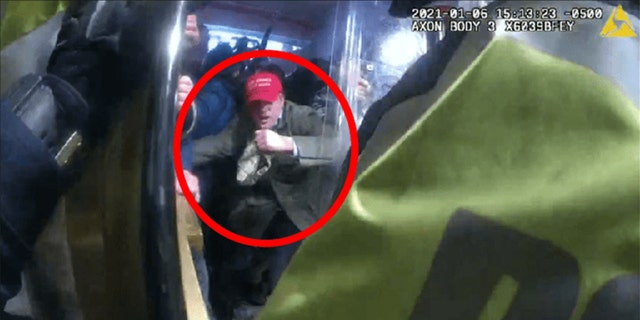 An FBI special agent says Klein, "in possession of... [a] riot shield, violently shoved the shield into an officer's body in an attempt to breach the police line," on Jan. 6. (FBI) (FBI)

The complaint, citing police body camera footage, alleged that Klein ignored repeated orders from law enforcement to back away from two sets of doors leading to the interior of the Capitol.

"Instead... he violently shoved a riot shield that apparently had been taken from an officer, towards the officers trying to stop the mob from gaining access to the building," it read. "In doing so, KLEIN pushed the riot shield in between the doors to the Capitol, preventing officers from closing the doors."

Another video captured Klein calling out for reinforcements, the complaint alleged.

"In one open-source video posted on YouTube, while a mob of people assaulted and struggled with law enforcement KLEIN was captured at approximately minute 10:37 of the video calling back to the crowd behind him, ‘We need fresh people, need fresh people’ multiple times," it read.

The announcement of his arrest comes as The Associated Press obtained hundreds of emails, texts, photos and documents shedding new light on the sprawling patchwork of law enforcement agencies that tried to stop the siege and the lack of coordination and inadequate planning that stymied their efforts.

FBI NORFOLK REPORT BEFORE CAPITOL RIOT HAD ‘RAW REPORTING’ ON ‘CALLS FOR VIOLENCE,’ NO MENTION OF BREACH

The AP obtained the materials through 35 Freedom of Information Act requests to law enforcement agencies that responded to the Capitol Hill riot.

Two firefighters who had been loaned to Washington for the day were the only medics on the Capitol steps on Jan. 6, trying to triage injured officers as they watched the angry mob swell and attack police working to protect Congress.

Law enforcement agents were "being pulled into the crowd and trampled, assaulted with scaffolding materials, and/or bear maced by protesters," wrote Arlington County firefighter Taylor Blunt in an after-action memo. Some couldn’t walk and had to be dragged to safety.

Even the attackers sought medical help, and Blunt and his colleague Nathan Waterfall treated those who were passing out or had been hit. But some "feigned illness to remain behind police lines," Blunt wrote.

Five people died in the attack, including a police officer. Two other officers later killed themselves. There were hundreds of injuries and more than 300 people have been charged with federal crimes. Federal agents are still investigating, and hundreds more suspects are at large. Justice Department officials have said they may charge some with sedition.

The Arlington firefighters ended up at the Capitol because, two days earlier, Washington Metro Police Chief Robert J. Contee had formally asked the Arlington County Police Department, along with police departments from Montgomery and Prince George’s counties in Maryland and Arlington County in Virginia, to lend them some officers trained for protests and riots, according to the documents.

At the time, the Capitol Police department had issued a security assessment warning that militia members, White supremacists and other extremists were heading to Washington to target Congress in what they saw as a "last stand" to support then-President Trump.