The group of 10 Republican senators that attempted to negotiate with President Biden on coronavirus relief slammed the president in a biting statement Wednesday night accusing him of misrepresenting their meeting and its fallout.

Biden on Wednesday was asked if he will have failed at his promise of bipartisanship if he does not secure any GOP votes for his $2 trillion-plus spending package after no Republicans voted for his coronavirus stimulus either. The president responded that the GOP group he met with before passing the coronavirus stimulus wasn't acting in good faith.

"The last plan I laid out, what was available, what I was suggesting, and how I'd deal with it," Biden said. "And then the Republican group came to see me. And they started off at $600 billion dollars, and that was it."

Biden added: "If they'd come forward with a plan that did the bulk of it, it was a billion, three or four, two or three. Allow me to have pieces of all what was in there. I would have -- I would have been prepared to compromise. But they didn't. They didn't move an inch. Not an inch."

Sen. Susan Collins (R-Maine) speaks during a Senate Health, Education, Labor, and Pensions Committee hearing to examine COVID-19, focusing on an update on the federal response in Washington, D.C., on Sept. 23, 2020. (ALEX EDELMAN/POOL/AFP via Getty Images)

That group of Republicans responded with their version of events in a statement Wednesday night, saying the Biden administration "roundly dismissed our effort" to "justify its go-it-alone strategy" that cut out Republicans.

"In good faith, our group of 10 Republicans worked together to draft a sixth Covid-19 relief package earlier this year. Our $618 billion proposal was a first offer to the White House designed to open bipartisan negotiations," the statement said. "Our package included the core Covid relief elements of the Biden Administration's plan, such as providing an identical amount—$160 billion—to support vaccines and testing. In addition, we later upped our offer to $650 billion to increase the size of the stimulus checks."

"The Administration roundly dismissed our effort as wholly inadequate in order to justify its go-it-alone strategy," the GOP group, led by Sen. Susan Collins, R-Maine, added.

The Republicans continued: "Fewer than 24 hours after our meeting in the Oval Office, the Senate Democratic Leader began the process of triggering reconciliation which precluded Republican participation and allowed for the package to pass without a single Republican vote." 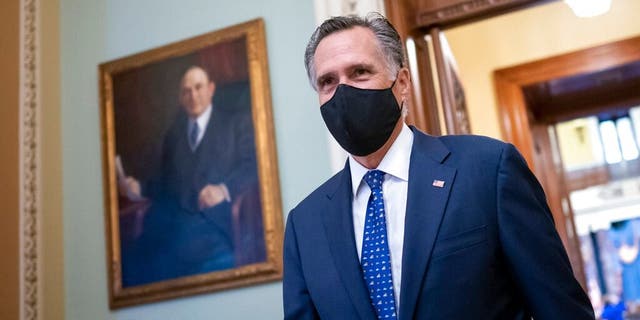 Even moderate Republicans have largely opposed Biden's spending plan from the beginning. They say that its money for everything from elder care to R&D to a new Commerce Department office makes it not really an infrastructure package, as the White House is selling it.

"[My] first concern is the overall cost of $2.3 trillion," Collins said of Biden's plan on NECN. "The president’s definition of infrastructure is extraordinarily broad."

"At its core, the president’s plan calls for a $620 billion investment in transportation infrastructure. However, the total soars to $3 trillion with its inclusion of these broad policy priorities that are a far cry away from what we’ve ever defined as infrastructure," Portman said last week.

Added Capito: "President Biden’s so-called ‘jobs’ proposal is a clear attempt to transform the economy by advancing progressive priorities in an unprecedented way."

Biden and those in his administration have repeatedly said they are open to negotiating with Republicans on his newest spending plan. But it's not clear how much Democrats will actually be willing to give up in order to secure GOP votes, especially as it appears they are gearing up to cut Republicans out via budget reconciliation again. Budget reconciliation is a process that allows the Senate to bypass the 60-vote filibuster hurdle and thus allows Democrats to pass legislation without compromising with Republicans.

It's also not clear whether Republicans are in much of a mood to compromise themselves because they are upset that Biden allegedly has broken his promise to work with them to govern.

Biden on Wednesday attempted to address some of the concerns Republicans have, saying Americans think most of the things in his plan are infrastructure.

"So I'm prepared to work. I really am," Biden said. "But to automatically say that the only thing that's infrastructure is a highway, a bridge or whatever. That's just not rational. It really isn't. I think the vast majority of Americans think everything from the sewer pipes to the -- to the sewer facilities, to the water pipes, I think they're infrastructure."

The things Biden named are infrastructure. But a Fox News analysis of Biden's spending plan -- which included pipes, schools, broadband and more under the definition of infrastructure -- found that less than $750 billion of the money in Biden's plan is for infrastructure.

The rest goes to other priorities that are not infrastructure. There's $213 billion for home sustainability and public housing; $30 billion to prepare for future pandemics; $45 billion for the federal government to buy clean- energy goods; $14 billion "to bring together industry, academia, and government to advance technologies and capabilities critical to future competitiveness" and much more.

It's not clear in what form Biden's spending plan will eventually pass, and when. Democrats may pass the entire thing as one package or break it up into several parts in order to keep all their members on board. It's also likely that the plan won't be passed through Congress until at least late summer or the fall.