From Minsk to Moscow, there has been an extended season of discontent, so the images of Russian President Vladimir Putin and his Belarussian counterpart Alexander Lukashenko shushing down ski slopes and snowboarding in the mountains around Sochi evoked some strong reaction.

There were meetings, of course, around the outing. Details on what was actually discussed were thin, but the pictures spoke volumes.

Lukashenko's constituents reached the boiling point in August after presidential elections that were widely considered fraudulent. Opposition figures were barred or thrown in jail. Their wives and a campaign manager stepped in and female troika led by Svetlana Tikhanovskaya stole the imagination of many, something that Lukashenko reportedly never thought would happen.

In rare images, hundreds of thousands of Belarussians took to the streets day after day, Sunday after Sunday, the day of rest becoming their standing rally date. The protesters were peaceful. Not a shop was looted. They often carried flowers. But the crackdown was brutal. Thirty thousand were detained, and an estimated 10 people were killed.

Western countries, including the United States, have sanctioned Belarus for the violence employed against the demonstrators and for a host of ballot irregularities. But Lukashenko carries on as if the undisputed victor, getting himself sworn in in an almost secret ceremony. 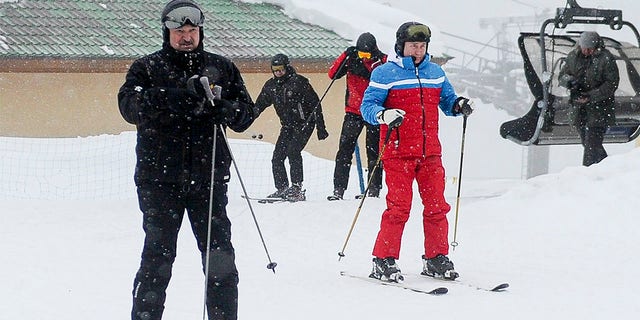 Often called the "Last Dictator in Europe," Lukashenko has been in power 26 years, and Putin is his protector. They've had their spats over the years, especially when Lukashenko has on occasion warmed to the West. But the skiing imagery suggested all that is behind them, for as long as they both last.

"He has decided, and this is a final decision for Vladimir Putin, that he will support Lukashenko in spite of the fact that this is the person responsible for the terrible behavior of the police, of terrible, militarized forces on the streets of Minsk and other cities," said Ekaterina Kotrikadze of TV Dozhd, Russia's last truly independent news channel, when Fox News asked how she read the images.

"Putin demonstrates that Moscow doesn't care about violence, about beaten people, even dead people in Belarus which Lukashenko is responsible for," Kotrikadze said. "For him, his friendship with Lukashenko is much more important than human rights violations in Belarus."

DOGS ARE MYSTERIOUSLY TURNING BLUE AND PINK IN RUSSIAN CITY

Two weekends of protests this winter all across Russia rattled Putin's cage, too, though the Kremlin does not say that. However, the large presence of riot police and 11,000 arrests, including the editor of an independent newspaper for a retweet, suggest such demonstrations do concern the Russian leadership more than a little bit.

Marchers were protesting the imprisonment of opposition leader Alexei Navalny, who barely survived what Western countries say was poisoning with a Soviet-era nerve agent over the summer. Navalny blames Putin for ordering the attack. The Kremlin does not even acknowledge that Navalny was poisoned and to diminish his importance further refuses to use his name when the subject comes up. Kotrikadze says the optics of the ski meeting send a message to both.

"When Putin and Lukashenko, two authoritarian leaders, really do not care about the human rights in their countries, when they ski," she continued, "when they talk about anything but the real problems in their countries, then we understand that the country-Russia-is in the position when we should not wait for any changes, any flexibilty from this president." 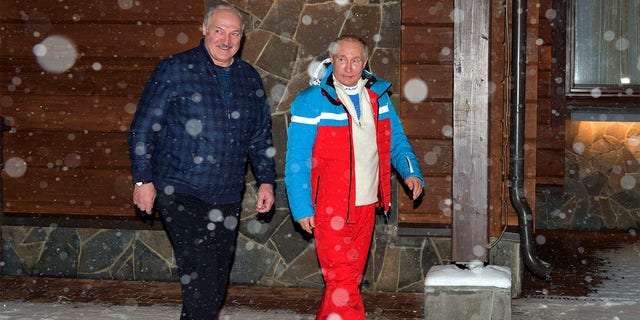 "He will do nothing," she said of Putin. "No talks with the opposition, no talks with society. He lives in his palace, his Kremlin behind the walls. He does not use the internet, social media, YouTube. He lives in his own world where his friend is Alexander Lukashenko, where sanctions are not something important to him."

In fact as Putin was skiing, European Union foreign ministers were discussing sanctions on individuals deemed responsible for Navalny's persecution, arrest and sentencing.

Those sanctions did not go far enough, according to Kotrikadze, who said such a punitive regime would only have an impact on Putin's policy if they are imposed on the oligarchs who are the Russian president's friends, against those "who have assets in Europe, who travel to Europe and who are interested in being free people."

Russia's protests have been put on ice until spring, but Belarus is still at it, albeit in an altered form as Lukashenko's stance, his policy of repression, has only tightened with time. The director of Radio Free Europe/Radio Liberty's Belarussian Service Alexander Lukashuk told Fox News, "It's pretty tough over there."

"They have turned the whole state organism into a repressive regime," Lukashuk went on. "Now people are being punished not just by the traditional instruments of the justice system but now the places where you work, the places you study, the communal services even all act as parts of the repressive regime. A whole region of active protesters can be switched off from electricity."

Vladzimir Astapenka was Belarus' ambassador to Argentina when the protest movement took hold. The long-serving career diplomat resigned in protest and is now in exile, helping run the country's National Anti-Crisis Management team. He said people are continuing to protest every single day, however much more stealthily to avoid paying the enormous price others have.

He said the authorities are handing out administrative sentences like candy "up to 15 days," he told Fox News, "and now sometimes with criminal sentences of two, three or four years just for participating in peaceful protests."

He said someone got two weeks of jail for having a photo of the red and white flag favored by the protest movement in his office, even though the picture was not even his. And someone else got jail time for having something white with a pink ribbon through it on his balcony. And then there are fines, Astapenka said. "They are to be increased to $2,000, which is four times the average salary in Belarus."

He said so far Europe's response has not been strong enough, "We believe," Astapenka said, "the reaction is not adequate to the gravity of events, to use another word, I would say to the terror. Terror against its own population applied by this illegitmate regime."

He said he has high hopes for the Biden administration helping the Belarussians achieve the democracy the demonstrators want.

Radio Liberty's Lukashuk said he believes the Belarussian president will alter the constitution to allow him to carry on after his term in a sort of "supreme leader" role. He said the photo opportunity with Putin and Lukashenko appears to seal a certain fate at least for now.

Belarus does need good relations with its neighbor and he says in the beginning, "there was an expectation that Russia could have been an honest broker. The leaders of the opposition tried to initiate their own dialogue with Moscow. It never happened. So this expectation that Russia could be a positive or honest broker in this crisis ..." he paused. "Of course ... [the opposition] received a negative signal from this skiing together in Sochi."

2 Antifa members threaten to 'burn' down DC during Black...

3 Iran demands US lift sanctions before it lives up to...

4 Biden DOJ wants DC's acting US attorney to transition to...