A 51-year-old man who kidnapped and raped a 14-year-old girl in 2006 was found dead in his prison cell just 14 years into a 421-year sentence on Monday, the State reports.

Vinson Filyaw pleaded guilty to kidnapping and 10 counts of criminal sexual conduct in 2007, admitting that he posed as a police officer to kidnap the girl after she got off a school bus.

He then chained her to a beam in a 15-foot deep bunker less than a mile from her home and raped her daily for more than a week. 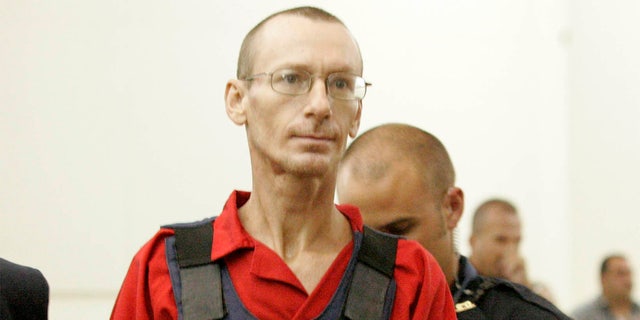 51-year-old Vinson Filyaw reportedly died in his prison cell Monday, 14 years after he was sentenced to 421 years for kidnapping, torturing, and raping a 14-year-old girl.
(AP Photo/Mary Ann Chastain/POOL/FILES)

Eventually, Filyaw gave the girl his cell phone for her to play games on, which she used to text her mother. Police then used nearby cell towers to find the general location of the bunker and rescue the girl.

The infamous case was turned into a Lifetime TV movie in 2018, "Girl in the Bunker."

It is unclear how Filyaw died, but the State reported that there were no immediate signs of foul play.

Filyaw's sentence of 421 years was the maximum allowed.

"I have a strong belief you have forfeited your right to be a member of this society," Judge G. Thomas Cooper said during the sentencing in 2007. "I can think of no crimes short of murder more repulsive than these."