Texas Attorney General Ken Paxton is defending a rule that limits entry for immigrants and their likely use of public benefits.

"It cost the country billions of dollars," Paxton stated on "Sunday Morning Futures," on Fox News, "If we're going to invite people in, we've got to make sure they can take care of themselves and that they're not going to end up on food stamps and Medicaid and health care insurance from our country."

Paxton explained that the "public charge" rule, put in place to set boundaries on public assistance for immigrants, was never official until the Clinton administration federally enforced it. The rule was halted in 2020 after a court order.

Now, President Biden has dropped the rule, prompting Paxton to the Supreme Court to defend the rule in court. 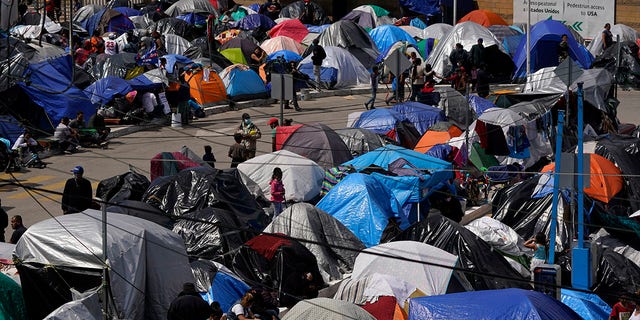 A makeshift camp of migrants sits at the border port of entry leading to the United States, Wednesday, March 17, 2021, in Tijuana, Mexico. (AP Photo/Gregory Bull)

Paxton stressed that even the impact of surging migration on small border towns has been intense.

"It’s very unfair to these border towns. A lot of these towns are smaller," said Paxton, "there’s so many people coming across....there’s so much demand on their services, especially with these children."Plus, added Paxton, " throw in the mix of COVID and other potential communicable diseases and they are overwhelmed and they are at risk."

Simply put, Paxton said what is happening at the border "is a humanitarian disaster" and it is the border towns that "are suffering more than any others."