What scouts, execs and coaches are saying about RJ Barrett's Year 2 leap

ON OPENING NIGHT in Indianapolis, New York Knicks guard RJ Barrett stood wide open in the left corner before taking a crosscourt pass and gathering for the shot. Despite Indiana Pacers guard Aaron Holiday closing hard, Barrett rose and fired a high-arching shot that hit all net and gave the Knicks a three-point lead just before halftime.

It was Barrett's third made 3-pointer in as many tries, headlining a final box score that would see him put up a team high 26 points on 11-for-15 shooting , eight rebounds, five assists -- and that perfect 3-for-3 mark from deep.

Heading into this season, Barrett, taken No. 3 overall in the 2019 NBA draft, had been working to remove a hitch from his jump shot with the help of his trainer, Drew Hanlen. The duo's offseason work was paying off right away. After shooting just 32% from long range as a rookie, Barrett had seemingly added another tool to his arsenal.

Over New York's next four games, he shot 17-for-66 from the field -- including 0-for-21 from 3-point range. The offseason experiment with his shot and its opening night returns suddenly seemed fruitless.

Barrett redoubled his efforts, hitting the gym at night after practice for another 400 to 500 3-pointers and 100 free throws each time. It began to produce the results he was hoping for when he and Hanlen first diagnosed the problem.

"You just have to keep working," Barrett told ESPN. "If you can just get the results you want that easily, everybody would be where they want to be."

New York remains firmly in the hunt for home-court advantage in the first round of the playoffs heading into its Sunday matchup at the LA Clippers (3:30 p.m. ET on ESPN). And as the Knicks have ascended to become this NBA season's biggest surprise, Barrett has grown from perceived rookie bust to significant contributor in their sudden revival.

But coaches, executives and scouts have mixed opinions on what comes next for the 20-year-old guard. 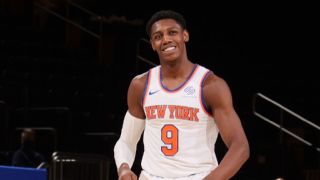 AFTER LAST SEASON, Barrett sat down with Hanlen and they both agreed to go through film from his first NBA season once -- and only once.

"Then we were never going to talk about them again," Hanlen told ESPN. "Last year was a frustrating year."

Entering the draft, the concern with Barrett was inconsistency with his jumper, and that proved to be problematic his rookie season: Barrett shot 32% from 3-point range with an effective field goal percentage of 44.5, second-worst among players with at least 30 minutes per game last season.

He finished eighth in Rookie of the Year voting and wasn't selected to either All-Rookie team.

"It bothered me a lot," Barrett said in December. "I really don't understand why I wasn't on it. But it was motivation -- motivation for next season. It was good to have an extra chip on my shoulder and just prove myself even more."

Over the summer, Hanlen and Barrett had identified some changes to his form, and two main goals were set: Improve his percentages from 3-point range and the free throw line. While the start of the season was indeed rough, the changes have produced results.

Barrett is now shooting 39.9% from 3-point range as well as 74.5% from the foul line, up from 61.4% last season. As a result, opposing teams have had to adjust to Barrett's newfound accuracy from the perimeter.

"His shooting," Charlotte Hornets coach James Borrego said, when asked to identify where he has seen growth from Barrett this season. "You can start there. Just the ability to shoot the ball now. He looks a lot more comfortable, more confident in his shot. He's made a lot more plays. I think his playmaking has really taken a step there -- and a lot of that comes out of your confidence in shooting the ball.

"I think players in general, when they can shoot the ball and they can get downhill, they get much more comfortable making plays off the bounce and making plays for other people."

Several scouts and executives also credited both new Knicks coach Tom Thibodeau, for helping improve Barrett's game, and Barrett himself, for being receptive to the instruction. The latter had been something that became an issue at Thibodeau's previous stop while coaching a Minnesota Timberwolves team that had hopes of building around former No. 1 overall picks Karl-Anthony Towns and Andrew Wiggins.

Barrett, though, has seamlessly settled into life under Thibodeau. Barrett and first-time All-Star and Most Improved Player front-runner Julius Randle are the latest players to receive heavy minutes from Thibodeau. Since the All-Star break, Randle leads the league in minutes at more than 38 per game; Barrett is third at 36.9.

Barrett's increased minutes, though, coincide with an uptick in his shooting percentages across the board -- including 42.8% from 3-point range on just over five attempts per game since the break. Right before then, Barrett had a stretch of nine straight games with a 3-pointer, a streak he said locked him in for the rest of the season.

"That's when I started to shoot well," Barrett said. "It's just really going back to the gym at night and getting extra reps. That's what it was for me. And also, as the year goes along, we learn each other, you learn your spots, you learn where you're going to get those shots."

Barrett's improvement as a shooter allows the other parts of his game to shine. He has always been a willing rebounder and defender and is aggressive attacking the rim. With a more threatening 3-point shot, it makes those other facets of his game more dangerous, as it provides more chances for him to either get to the rim or to make plays for others.

"As the year has gone on, he's playing under better control," an Eastern Conference executive said. "The decision-making and the shooting had to improve, and he's doing less of putting his head down and bull-rushing into defenders.

"The big thing about him as a prospect was he'd play super hard and be competitive and do whatever it takes to win ... RJ is going to be just fine."

While Barrett's offseason focus was on improving his jumper, it wasn't the only thing he worked on. He credited Knicks assistant coach Johnnie Bryant, who spent the past few years working with All-Star Donovan Mitchell with the Utah Jazz.

"I'm a lot more comfortable," Barrett said. "Like last year, if you iced me on the ball screen and made me go right, I'd be done. Now, I've learned how to snake and get back to my left or still get to where I want to on the court ... or I can go right now and finish with my right hand.

"It's tougher to stop when you add more things to your game."

TALENT EVALUATORS HAVE come away impressed with Barrett's growth, but there remains skepticism about his future.

Some point to a clear hole in Barrett's offensive game: his poor shooting on non-rim 2-point shots in the paint, generally referred to as "floater range," from roughly three to 10 feet. For the season, Barrett is shooting 33.7% on those shots, the fifth-worst percentage in the league.

He also is shooting a below-average 56.6% on shots in the restricted area.

"I don't view him as a franchise or star-level player," a Western Conference executive said. "I think he's a complementary scorer and bucket-getter. His shooting has helped his efficiency, but he still plays a lot off the bounce and hasn't proven able to make those shots.

"If he can improve as a finisher and his shot selection, he has a chance; because he can get to the paint and get to the line, and that's what the best players do."

Some thought the ceiling could be higher though.

"I probably don't hold him in the same regard as Jaylen Brown, [but] that's his upside," an East scout said. "That comes to mind because of similar draft position and size, though I'd rather have Brown. [He's] the upper end."

For his part, Barrett is on to the next stage of his development. He and Hanlen plan to work on two new goals: improved finishing and adding an off-the-dribble 3-pointer.

"Think about all the top players in the league. They all have that in their games," Barrett said.

It would've taken a leap of faith a year ago to see Barrett making the kind of improvement he did as a shooter this season. And the Knicks are banking on the same drive and determination that saw Barrett evolve his game to continue as they chase a sustained run of playoff appearances.

"I knew the type of characteristics that he had,'' Thibodeau said, when asked about his early impressions of Barrett. "I loved his size, I thought he got into the lane extremely well, and I knew he was young.

"Most guys coming in, it takes some time. But just the way he works, who he is as a person, I knew he would improve; and I think we'll just continue to see that throughout his career. And again, he's another guy that's team-first. Whatever you ask him, he's willing to do. Very coachable.

"I think he's had a terrific season, and he'll continue to get better."